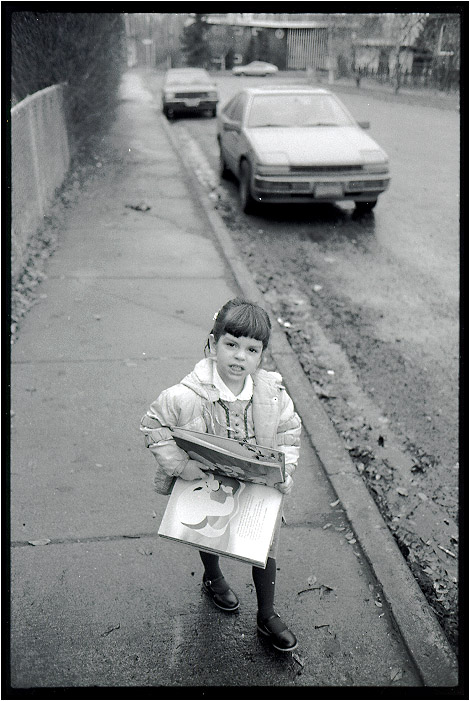 My project of late has been sorting and marking photos. In searching for negatives of unmarked prints (so I can mark them!), I've been finding interesting images that I've never printed. This is one from 1992. I get a kick out of the little girl's facial expression. One thing I would wish for here is a more out of focus background.

Don't forget, it's pretty easy to do that in Photoshop.

I like the background. It looks like it's misty rather than out of focus. It's at that weird place in between, and it adds a lot of atmosphere to the shot. The girl just seems to pop out of the mist.

I like the expression too, and it's a great shot. I'm surprised that you never printed it, it's so full of feeling and mood.

This was printed straight on Ilford Perl 5x7 RC. Think I'll print it somewhat larger on fiberbase and do a slight burn around the top to make her pop out even more. This shot demonstrates some of the beautiful yet subtle potential of the 50mm focal length (in 24x3).

Brilliant. The line of the curb leading up from the corner is usually such an obvious device - but now, with those additional diagonals of cracks in the sidewalk, one of which leads back to her ear and the line created by the position of her feet -- brilliant. I've looked at a lot of your pictures online - I like this one best.

Do yourself a favor - don't screw around in photoshop. if you had any less depth of field, then those cracks in the sidewalk, that pile of whatever on the sidewalk, all those other things half described would dissapear.

I actually really like it(the print) the way it looks on my monitor.

I'm with Alan. The girl is nicely seperated from the background, despite the array of lines running through her head, so leave it well alone. The image has a wonderful feeling of truth, which will disappear if you prettify it in photoshop.

One nit: is that a thumbprint on the fence?

No - I think the diagonals running through her head are among the best things here. don't change a thing

I think we do agree. I certainly think the lines are great. I just was trying to say that they are blurred enough to stop my eye from thinking that they're connected to the girl's head.

Struan, nope, I checked and it looks like it's a digital artifact. Couple of dust specks, though, which appear to be on the neg. Time to use the rubber stamp tool. To my horror, I have missed thumb prints, smudges, etc., in the past. Quite the discourtesy to viewers. Now I'm wiping the prints with a cotton cloth before scanning.

I don't think that it's an artifact, just they way the lens rendered the chain link. You could scan the negative and compare it to the scanned print. And I would leave it, it adds dimension. Was this taken with a Leica Summicron?

Do you know this girl? I am always hesitant to take photographs of kids I don't know. Maybe that's why I rarely have shots this good.

Great picture; frame it and hang it.

I knew her casually (and she knew who I was), but it wasn't until much after that that I was dating her mother. The lens was the 50/2 Summicron. After posting this, I printed it (full frame, as above) onto 11x14 Ilford MG IV FB Glossy with a slight burning in of the top area to ehance her "popping out" better. It looks pretty good so I mounted and matted it onto 16x20 and hung it.

this photo, like most on your website, has a great feeling of authenticity. the beautiful imaginitive world of a young child is fully expressed by her holding on to a cartoon book of alladin, a cherished possesion. in the foreground, there lies a drab world of old beat-up cars and grimy cold weather -- all out of focus in the mind of the subject. excellent pict.